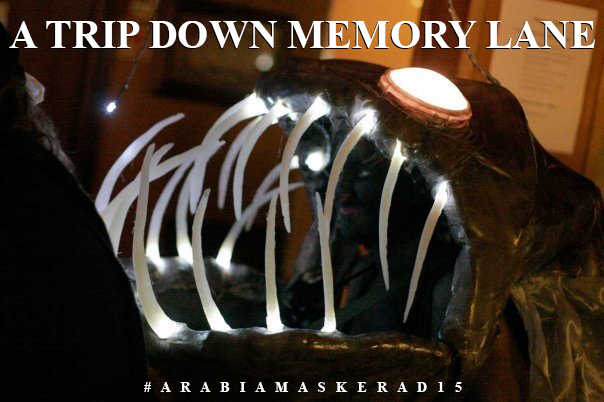 Arabia Maskerad moves gently in the borderline of public and personal.

In the fourth part of our article series we concentrate on TOKYO members memories of Arabia Maskerad. In the past our team of investigative journalism has reported of the birth process of Maskerad’s decorations, the annual costume contest and Maskerad’s history.

Stains of blue face paint everywhere, polyurethane that’s stuck into the floor of Ääniwalli. Many of them are savory, some not so much, when the memoirs of the much seen masquerade crowd are recollected.

“We gathered a lot of people together and improvised a choreography. My steamy bollywoodbombaybomb-mindset made it seem like a spectacular performance“, describes Petra Silfverberg her experience of last year’s Bollywood Hospital themed Maskerad. “In my first year of school we dressed up to be Picasso’s Guernica in the spirit of Viva l’arte. We won the first prize. It was an Arabia plate, of which the location is undefined for the time being“.

Heta Huttunen knows that before the party, one shouldn’t consume a whole bottle of wine. Huttunen says that from Arabia Maskerad 2014 she remembers ”many bare bellies and belly-buttons” and ”the heartache of the evening and headache of the morning”. “I attached a plug with pins to my hair for the Tšernobyl-themed party in 2013“, she recalls and continues “The DJ was terribly good and I danced until the light signal appeared“.

What happened when Mikko Akkola threw himself into the hands of the masquerade crowd, was unforgettable. Dressed up to be The Phantom, Akkola had made handguns out of cardboard to be the culmination of his costume. “The handguns, an exceptionally successful piece of art, would have been something to be marveled by future generations, if it wasn’t for the misfortune that they disappeared during a confusing moment of crowd surfing“, Akkola bemoans.

Kasperi Mäki-Reinikka recalls how during a certain year’s Maskerad the bouncers were eager to ask for identity cards from the disguised guests. Another year he says someone’s costume was decorated with dead fish, after which the whole place stunk.

One remembers quarreling in a cleaner’s cupboard, another describes how he got to scratch the paint of his poison ivy costume out of his skin for days after the carnival. Some people’s remembrance may have even already diminished, perhaps not later than in the dawn of the following day of the wild night. Veera Konsti snickers recalling ”virtually nothing” of her own Maskerads.