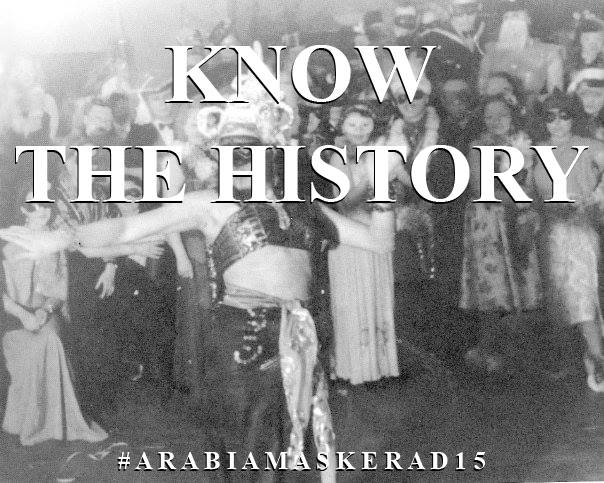 Arabia Maskerad is not just a birthday party of student association TOKYO, but also Finland’s biggest masquerade. Neither is Maskerad a new invention, as it has been celebrated since the beginning of 1900s. A new era of Maskerad begun in 2001.

In the third part of our article series we take a closer look at the history of Arabia Maskerad. In the past, our team of investigative journalism has reported of the birth process of Maskerad’s decorations and the annual costume contest.

A little is known about Arabia Maskerad’s prehistoric times, unfortunately. What is certain is that Maskerad tradition dates back to the early 1900s, when the festivities were celebrated in one of the downtown restaurants of Helsinki. The costume party, that was a common thing for both, students and staff, was known as Ateneum Maskerad, since our school was located in Finnish National Gallery Ateneum back then.

The tradition got lost in the 50s. One theory is that this was due to the fact that the wacky celebration would have managed to get banned from basically every restaurant of Helsinki. Perhaps an urban legend, on the other hand perfectly possible, who knows.

In the early 2000s the Student Union TOKYO, founded in the 1960s, decided to return to its roots. Maskerad was dug out of mothballs and, since our school’s location was at this point changed from the national gallery to the ZIP code area 00560, its prefix was also exchanged from Ateneum to Arabia.

The comeback Maskerad was a rip-roaring success. The event that was organized in Media Centre Lume gathered up over 800 guests. Celebrations were intended only for TOKYOs members, but also teachers managed to sneak into the party with costumes on.

TOKYO decided to make Arabia Maskerad a tradition. Since 2001 to this date Maskerad has been celebrated every single year. Starting from 2003 the costume party has had an annually changing theme (see a full list of themes here). In addition to Media Center Lume the event has been organized for example in Restaurant boat Wäiski and Cultural Center Gloria. The program, that is always bound to each year’s theme has included it all, from bands and fire-eaters to circus artists and dancers.

During its new era Maskerad has not been banned from any of the celebration venues – at least not reportedly. The party, that has now grown to Finland’s biggest masquerade, however seems to get to the headlines every now and then. One of the most interesting reasons was when after the Voodoo-themed Arabia Maskerad 2010 the decoration team forgot to clean out a cow’s hipbone from Korjaamo’s forecourt. Next day’s newspapers made clear that apparently the people of Töölö weren’t too used to gigantic bones in their street view.

Although the Maskerad has been opened to the staff and other party guests outside our school, the festivies still reflect the everyday life of TOKYO. Themes have been kept topical and in relationboth to our school and the world itself. For example, the last year before Aalto University stepped in to the picture, Maskerad was celebrated with a theme ‘Vive L’Art‘ as a symbolic gesture and a goodbye for University of Art and Design Helsinki.

Next year is Arabia Maskerad’s 15-year anniversary. However, we here at the headquarters of Arabia Maskerad, welcome you most warmly to be part of the history of Finland’s largest costume party already starting this year. The event takes place next week, if you need help killing time you can for example take a look at this fabulous video made by Konsta Polkutie from Arabia Maskerad 2014!