TOKYO’s history is as colorful as the students running it. Up to 2010, TOKYO was the Student Union of the University of Art and Design. After the creation of Aalto University, TOKYO continued to operate as an association, as a university can only have one student union. The association’s official name is the TOKYO, Students of Art, Design and Architecture in Aalto University, and it uses the abbreviation TOKYO of its name.

The former Institute of Industrial Arts and its predecessors had a long history of student activism also before TOKYO. The earliest known group of students was in 1913, the Toverikunta (“Comrade Community”), which published its own magazine with the same name.

For those, who want to take a closer look on our  history, there are some sources available. First off, we have our history (available at TOKYO’s office in TOKYO Space) that unfortunately exists only in Finnish (but if you happen to have Finnish skills you should totally go for it. There are also pictures!! Pictures tell more than thousands of words!!!).

Besides of the history we also have the TOKYOwiki website – a very interesting relic from TOKYO’s student union days. It’s mostly in Finnish, but there are some texts written in English as well.

Following up: a little summary of how TOKYO made it to the present day, all the way from 1960s. Enjoy! 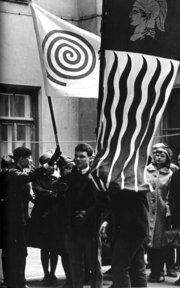 “TOKYO” was at first an abbreviation of the words “Taideteollisen oppilaitoksen kuvaamataidonopettajaosaston ylioppilaskunta” or “the Student Union of the Art Teachers’ Department of the Institute of Industrial Arts”, as the association was initially limited to that department when established in 1961. Student activity was lively from the beginning. The first elected Chairman was Pertti Pulkkinen (chair of the board 61-63). At first TOKYO tried to copy the academic culture of other student unions in Finland with the help of the Finnish Association of University Students (SYL). TOKYO began arrange academic balls and masquerades. This activity was, however, quite small and not yet concentrated in student activism. From this period dates also the symbol of TOKYO, a spiral, which was selected on the basis of a design competition.

In 1966-1968 TOKYO’s chair person was Yrjö Sotamaa. At this time, TOKYO set the first education policy goals: Sotamaa sought to influence the transformation of the school to a university. Sotamaa also sought to create an international cooperation that resulted the Nordic design students’ cooperative organization. This came at a later stage to influence the internationalization of the higher education in the University of Art and Design. 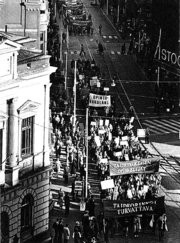 “We didn’t vote so much in the meetings, we were just shouting like hell.”

This was the era of major projects. Pasila-house was a project for new premises for the school, and art students held a great exhibition called the World Fair at the Ateneum. Pasila-house was finally cancelled and TOKYO contributed to the project by organizing a symbolic foundation stone ceremony. World Fair was an unique event as it brought together all art and architecture students. 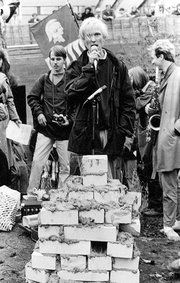 By the 1980s, TOKYO wanted to detach itself from the overly political activity of the 60’s and 70’s. Activity slowed down but continued to focus on the events and student culture. TOKYO’s position was strengthened with the renewed national regulations: All students had to belong to their school’s student union.

TOKYO organized a variety of art events and exhibitions, and contributed to its members, where possible, their own events. A special project was named Villa TOKYO, an old school building which was renovated as the first big commune housing project in Helsinki for art students.

“When I started as TOKYOs chairman of -97, activity was almost stopped, and there was no contact with any direction. The first thing was to make contact with students, to remind them that they belong to such an organization and that this organization could also be used.”

In the 90’s the student activity gradually declined. TOKYO acquired a gallery space from the Bulevardi street in the the city center, and for some time the Student Union office also moved away from the school to these premises.

TOKYO organized spring exhibition and different parties and gatherings. In -91 TOKYO hosted a Nordic art students seminar, which was attended by more than 50 art and design students around the Nordic countries. TOKYO Christmas Sales was held at the Old Student House in Helsinki.

The Bulevardi gallery (called Into) was making deficit and because of the distance from the school, students felt estranged from TOKYO. The middle of the decade could be described as TOKYOs “black era” when the student union didn’t care for the general interest lobbying of its students. Later on some misuse of funds was also reviled. 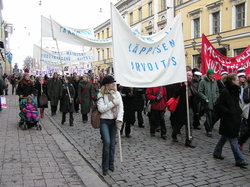 In the early 2000s TOKYO saw a resurgence in activity. TOKYO also faced new challenges such as an increase in the numbers of international students. The student union’s operations also became more structured; TOKYO appointed an association secretary to aid the head secretary, and even experimented with an international secretary. In 2008, the student union hired, in collaboration with the University of Art and Design, an educational policy coordinator. Kipsari’s activities were also legalized with the formation of Kipsari Oy as an established company. TOKYO was also at the forefront of the digitalization boom of the 2000s: in 2006, the student union introduced its wiki-based website TOKYOwiki.

This era of TOKYO’s history was marked more by advocacy work than event organization, but parties were still arranged; notably, the Maskerad events became established again as annual celebrations of TOKYO. Other activities included the Christmas sales, sports services, various campaigns and the proposal for the teacher of the year, who would receive a raise from the school. In 2008, TOKYO donated 0,7% of its revenue to development aid.

The 2000s also saw TOKYO reaching out to other art student unions: the role of the Ars Yo collaboration was emphasized, and the smaller student unions Teyo, KUVYO (formerly STAKO) and SKY were taken onboard. The 2010s have consequently been a time of change for TOKYO from inside and out, with the association dealing with the aftershock of the merger as well as re-examining its role going forward. TOKYO’s operations also expanded with the establishment of the movie theater Kino Sheryl in February 2015. Other major events included acclimation to the newly-established Aalto University as well as the gradual move from the former Arabia campus in Helsinki to the school’s new premises in Espoo’s Otaniemi, which culminated with the opening of the Väre building in the fall of 2018. The old campus, as well as its venerable Kipsari restaurant, were given due respects with a farewell party in May 2018.

Over the last several years, TOKYO has continued its important work in bringing ARTS students together, both upholding the most important pillars of ARTS’ culture (such as Maskerad and the Christmas Sales) as well as building new bridges to other associations and institutions of Aalto University outside ARTS. TOKYO has also become increasingly international, with significant numbers of non-Finnish students becoming a key part of the association’s activities.